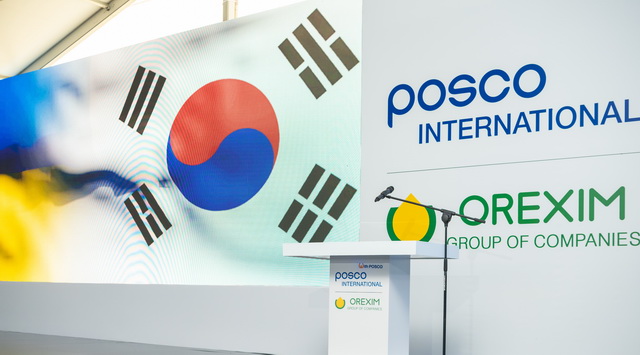 Posco International imported 68,000 metric tons of feed wheat from Ukraine, for the first time in South Korea, a move to secure a stable grain supply system for the nation.

Of the total, 41,000 tons were imported through the Ukrainian grain terminal invested in by the trading company.
The imports were made in partnership with Nonghyup Feed, the largest feed grain importer in Korea.

This shipment was the first import of feed grain from a overseas grain export terminal that was invested in by a Korean company.
With the initial supply of feed wheat, the company said it plans to build a stable national grain procurement system using its own terminal.
Early last year, Posco International signed a deal with Orexim Group, a Ukrainian company, to acquire a 75 percent stake in a grain export terminal in the Ukrainian Black Sea port of Mykolaiv. The terminal was completed in September last year. The terminal is capable of shipping 2.5 million tons of grain annually.
Nonghyup Feed CEO Ahn Byeong-woo said, “The import of feed wheat through cooperation with Posco International is significant in that Nonghyup Feed has contributed to food security and enhanced the actual benefits of livestock farmers through the stable introduction of competitive raw materials.”
The firm is strengthening its presence in the global market by selling grains such as corn and wheat to the European Union, the Middle East, North Africa and Asia, and is making Ukraine a key hub for grain trading.

Other news
On August 31, 2020, OREXIM made a transaction for the sale of the Everi Terminal

On 31 August 2020, OREXIM Group completed the transaction regarding disposal of the port terminal “Everi” to Renaisco B.V. (the Netherlands). Renaisco B.V....

The Grain terminal of Posco&Orexim shall be officially opened on 24 September 2019. The Terminal was built on the base of ex-Nikolaevskiy KHP. The total storage...

This year Stevedoring Investment Company celebrated 10 years since its foundation. On 10 September 2019 the company took their 10-million barrier of exprort-import...